Last night was the lau 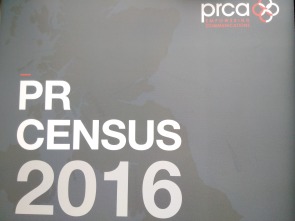 nch party for the PRCA’s 2016 PR Census. The first from the PRCA since 2013, and what I think remains the best ‘state of the industry’ survey out there. Gathering data from nearly 2000 PR practitioners from across the UK, it shows some positive news about PR, as well as identifying (some of the same) issues that we’re facing.

Here are my thoughts on a couple of key points that I picked out:

Some of the more obvious results were that this is still a young person’s game, with the average age of 28, and 64% being women. No real surprises there. But seeing an average 10k pay gap between women and men, in an industry that is dominated by women is pretty outrageous. While this is sort of explained by the increase in men in senior positions (and thus being paid more) what are we doing about the mass exodus of women in senior positions? Could it be that the sector is not flexible and supportive enough to women who choose to start a family? 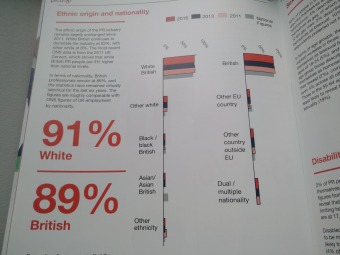 Another big concern for me is still around diversity. When I first entered the PR industry 13 years ago, we were worried about diversity and talking about how to tackle it. So I really despair that the sector is still 91% white, with little to no change since 2013. The industry is still also 91% degree educated, again, little change from 2013. So we’re still talking about the issue with diversity without doing anything about it.

Some positive news is that the younger generations of PR practitioners are both more diverse and more likely to be working in the industry without a degree, it still remains a massive issue that we supposed to be communicating and influencing millions of different people while being the majority middle class and white.

The PRCA does some great work with their school outreach team, encouraging more young people to enter the PR industry, but we also need the employers to stop having a degree as a prerequisite for getting a job – nearly every job description I see asks for degree education.

Back in 2013 I helped to develop and launch the Higher Apprenticeship in PR. Its purpose was to open up the industry to young people from different backgrounds who didn’t want to go to university. We brought in some fantastically talented, enthusiastic young people, the big employers were on board, but once the Government funding for PR, marketing and other support dried up, so did the industry enthusiasm. One of the first 10 to start the scheme, was recently in the PRWeek 30 under 30, and is only 22! While it’s still running, the number of new apprentices now is nowhere near the 120 a year target that was first set.

Low and unpaid internships are still too prevalent in the industry. And all they do is exasperate the current problem as only white middle class families can afford to pay for a young person to live and work in London (or any major city) without any income. We keep talking about the problem with diversity while continuing to do exactly the same things that cause the problem.

Some of the conversations around this last night were around rebranding “graduate schemes” to intern schemes, so to encourage non-graduates to apply, which is fine. As long as the intern schemes pay at least a London Living Wage, and aren’t just drawing in the same people who can afford to take them.

There was also some frustrating results in evaluation, with 16% of practitioners still claiming to use AVE – I’m hoping that all this means is that AVE is just one part of evaluation, and not the main source. Even then it is still worrying that so many people use such a useless and antiquated evaluation method. That said, considering 30% don’t use any evaluation at all, it remains an area of concern.